Summer conditioning is routine for most high school football teams, and Wayzata High School in Plymouth,Minn., is no exception. On an overcast June morning, wide receiver Ted Okerstrom was wrapping up that day’s session with team sprints. Suddenly, the 16-year old collapsed face first onto the artificial turf field.

Team members got the attention of the defensive coordinator, who quickly analyzed the situation and realized Ted was in trouble. The coach initiated the chain of survival that he and the rest of the staff had been trained to follow in such an emergency. He began performing CPR on Ted, while Coach Tracy Byrd called 911 and ran to get the school’s automated external defibrillator (AED) from the hallway across from the gym.

As this drama was unfolding, Ted’s father, Norm, was at his office about eight miles away when he received a call from a good friend and former Wayzata teammate. His friend’s son was also on the field that day and had called his dad. Norm’s friend said, “Norm, Teddy’s down, it’s serious—they’re doing CPR on him!” Stunned, Norm sped to the field as fast as possible and prayed: “Lord, our kids are Yours and we’ve taught them that they are gifts from You, that we are blessed to be their parents. But, God, please don’t take him today.”

When Coach Byrd reached the school, he alerted administrative assistant and CPR instructor Dee Schrader, who sprang into action and grabbed the ZOLL AED Plus.® Schrader alerted Ryan Johnson, the school’s strength and conditioning coordinator and assistant football coach. Coach Johnson had been a volunteer firefighter for his local community and had received First Responder training. As Byrd, Schrader, and Johnson rushed across the parking lot back to the field, the senior wide receiver, the fastest student in the school, grabbed the AED from Dee and took off toward the field, saving precious seconds.The defensive coordinator continued administering CPR while Coach Johnson turned on the AED. He attached the electrodes to Ted’s bare chest.

“It was a hectic scene. Everyone was trying to help but there were too many hands. It was the AED Plus that really helped. It kept me focused, analyzing the heart rhythm, directing me to administer a shock, and giving me feedback on my compressions. It was very direct and to the point, and helped me quickly decide what I needed to do, which was to clear everyone off Ted and allow us to do what we needed to do.” He adds, “The AED was the head coach. We let it take command.”

When the AED Plus advised a shock, Coach Johnson instructed everyone to stay clear, and he administered the shock. The AED Plus then directed them to continue CPR, giving feedback to “Push Harder” and then“Good Compressions.” Dee Schrader gave two emergency breaths. She recalls, “He literally sucked in the second breath, and we got a pulse!”

Then the paramedics arrived, approximately 12 to 13 minutes after Ted went down. Norm pulled up just after his son was loaded into the ambulance. He swung open the doors, grabbed Ted’s leg and said, “I’m here,Ted. Dad’s here.” There was no response. As Norm climbed into the front seat for the ride to the hospital, he asked if his son was dead. Responders told him that he had regained a heartbeat and was breathing on his own. “My prayer was answered,” Norm said.

Doctors still have not been able to determine the cause of Ted’s sudden cardiac arrest (SCA) or how likely it is to happen again. So he now has an implanted cardioverter defibrillator (ICD) just in case.“Other than not being able to play football, I’m doing just about anything I want to do,” said Ted. “Just after,it was hard not playing football, but I continued to be a member of the team as a wide receiver’s coach.”

Ted graduated in 2011 and is now a student at the University of Nebraska. “I’m not really sure what I want to do yet, but I’d like to look into some type of health, medical, or athletic-related career,” says Ted.

Since Ted’s save, an additional AED has been placed closer to the athletic fields. “The use of an AED is now apart of our overall safety program,” Coach Johnson said.“It is not just in the school hallway. There is a game plan for an emergency just like there is a game plan for every workout. At the beginning of summer as well as the beginning of the school year, our staff reviews safety protocols and procedures as well as receives additional medical training.”

During the past three years, Norm and his wife, Kim,have been involved in raising awareness about SCA,the importance of knowing CPR, and having AEDs available. “We feel very fortunate and blessed to have our son still with us. When it comes to sudden cardiac arrest, most people do not get a second chance. We want to ‘pay it forward’ and help others to become 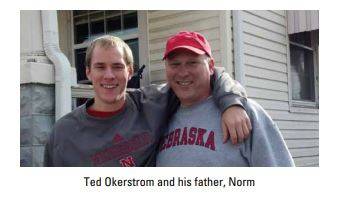 Added To Your Shopping Cart!